On occasion, I get kick back on the way I feed my rabbits. I respect the choices of those who disagree with me. They are doing what works well for them but what most people don’t realize is we don’t live where they live, we don’t have the same rabbits they do, nor do we have the same goals, or pocketbook.Our

We live in Wyoming which has four seasons: ‘almost winter, winter, still winter, and road construction’. Saturday is forecast to be 96 F. and Monday and Tuesday in the 40’s and below freezing at night. It will flip the switch from this year’s sweltering hot summer to freezing cold and that’s Wyoming. Weather plays a huge role in our feed program as it limits resources. Our goal is to live a more natural lifestyle and gain a greater independence from the commercial world. Natural meaning buying whole grains and hay from local ranchers as it stores for 12 months and during our short summers provide as much feed as possible from our own property. Kirk tells me that they raised rabbits as a kid and his father’s father before him. I can’t imagine that they used commercial feed with money as scarce as it was during The Great Depression, WWII, and raising four boys. 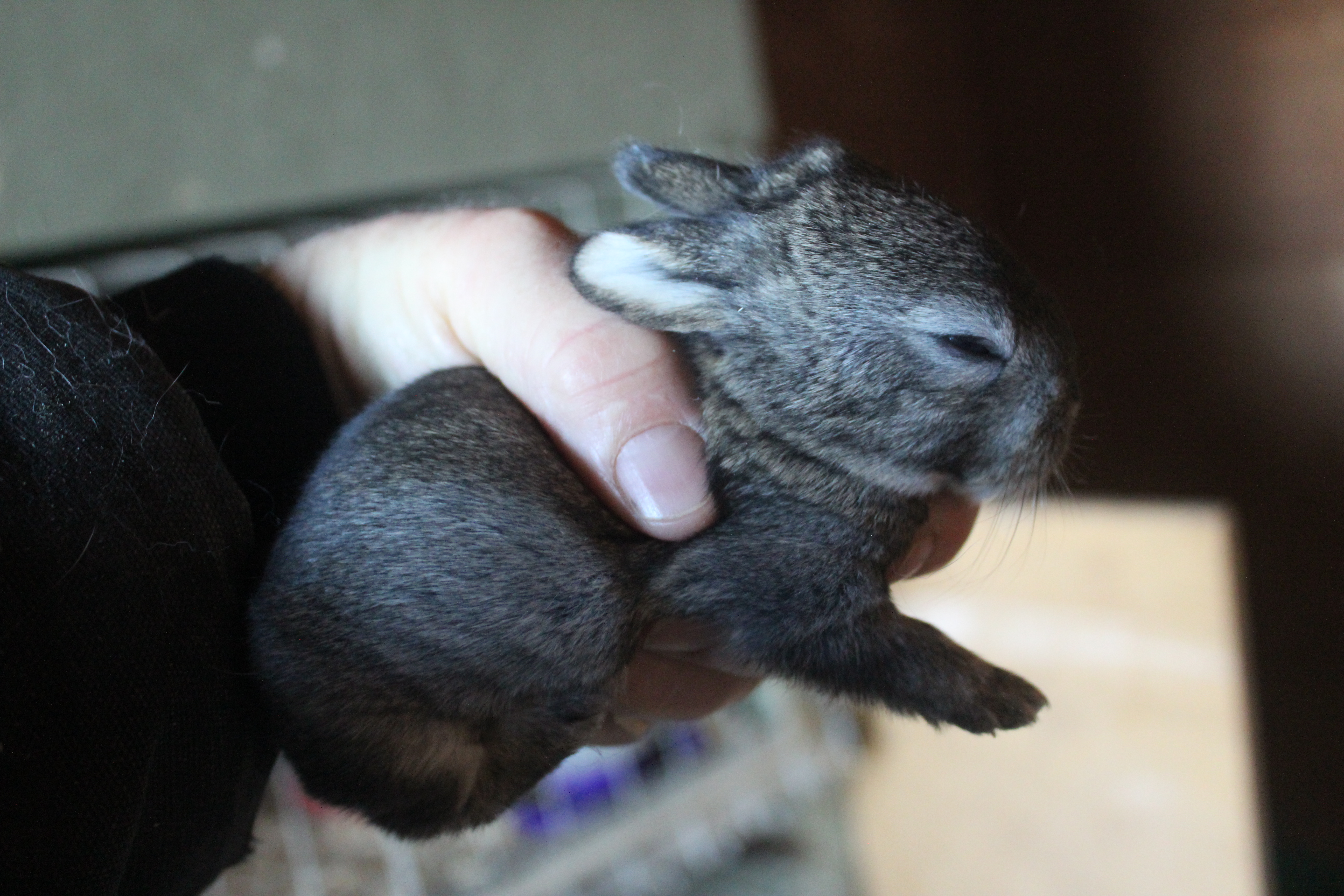 Rabbits ears are so short when they are babies.

We buy the best hay possible in our area, typically orchard grass/alfalfa. This year with the 30 to 40% hay shortage, we ended up with premium second cutting alfalfa. We did not complain as it is the best quality alfalfa around and what he had for sale. He wasn’t selling much. It comes in large round bales and must feed goats, sheep, chickens, and rabbits. We do not have storage for square bales. Our hay guy asked me about the animals we fed and when I mentioned that we fed his hay to our rabbits pretty exclusively as their feed. He made a comment that reflected (of course) and rattled off the nutrient values in it. He further expounded that commercial feed is made from by-products – the left overs from something else. Not the cream of the crop but definitely useful if that is your resource.

I don’t know what is in rabbit pellets. The label doesn’t disclose much just percentages of protein, calcium ……? But what is that from? What is not on the label that they do not by law have to disclose? Truthfully, what am I feeding my rabbits? I see the hay fields and I know how he raises and puts up hay. I know the gentleman we bought oats from as we’ve known him most of his life. The wheat, we had a long conversation with the gentleman who cleaned it but not the buyer. We are thinking we might grind the whole grains. It increases the nutrient ingestion. It’s what our oats guy does for his chickens. We would do a different combination for each type of animal and time of year. I want to know what my rabbits eat because I eat my rabbits.

This year as we buy feed in bulk, will try and get a measure of how much we need to purchase to tied us over until the next harvest and how much room we need to store it. Buying or producing food to tie one over to the next harvest is nature’s way. Commercial pellets are viable for about six months as ground grains go rancid and with rabbit food, that’s a problem as the feed sits in the stores and warehouse since the domestic rabbit population is low in our area. Most “vitamins and some minerals added to commercial feeds lose efficacy after about three months”. After the first six months in which hay looses a little nutrition, it holds pretty steady for three years if stored well. Whole oats nutrients are good for about 12 months – when the next harvest is due. Whole foods are looking pretty good from my view. 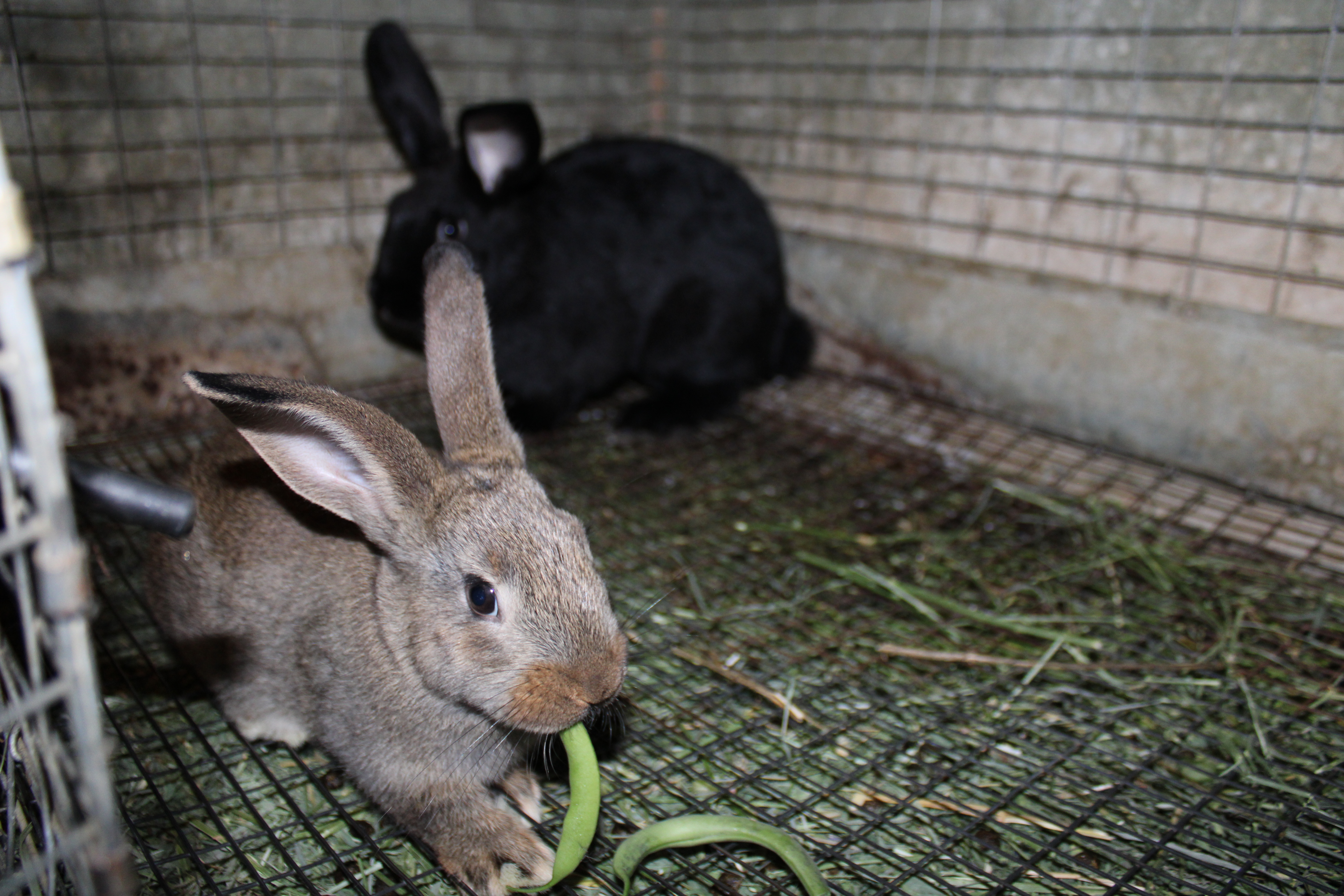 We might be able to get some barley grown just over the state line to include with the wheat and oats. Not good for rabbits but good for the other livestock. I’m thinking about purchasing a little sunflower seed in big bags to add in for the really cold spells this winter. How much of each food to fed is where I’m am investigating right now. It will come down in part to how our rabbits do.

My feed choices have never stayed the same. It is not different with ranchers. It is about what works for the particular animals you have, what’s available, and what the cost is. I remember my father talking to the nutrition specialist as he placed a custom order for pellets for the sheep or cattle in winter. Then there is the, ‘what will they eat’? We got a rabbit that does not like oats or cucumbers. He will be dinner. We select breeding stock from those that do well on what is available in our area. No fussy gussies for us.

On occasion, we do use commercial pellets as a supplement like with Betty Boo this summer. She is 4 years old and that is nearing the end of her kindling age. The stress of kindling two litters in rapid succession slimmed her down and effected her milk supply. Pellets put weight on her fast and it helped. She is our only breeding doe at present as we dropped down when I was so sick last year but she has yet to lose a kit in four years. Her feed program can’t be all that bad. We are keeping two of her offspring to replace her.

The truth is, our rabbits get overly fat on commercial feed and irritated if they aren’t spending a good share of their time munching. If I put in pellets and hay, the hay disappears first.

Another big bonus of feeding mainly hay is I never worry about the rabbit’s teeth which never quit growing but because of the orchard grass they wear down nicely. This year I’ll have to keep an eye on that but I have a few ideas in mind if a problem occurs with alfalfa. 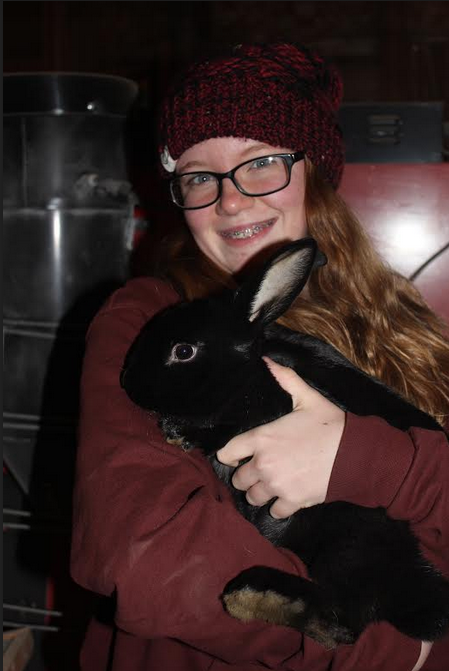 Jaden, born in the fall a couple years ago and this is a winter shot. She is one of the too fat ovary lessons we learned.

New Zealand rabbits are known for their excellent feed to weight conversion and I’m told ours are huge in comparison to the norm. Part of excess fat goes to the ovaries in does and makes them infertile. Fertility is critical when raising rabbits for meat. You want large litters and lots of them. I’ve not read anywhere where excess fat around the ovaries is reversible. Commercial feed for us puts too much weight on.

Raising one or two rabbits versus 20 to 40 is a whole different ballgame. We are not looking to have a rabbit for 12 years but a mere 4 when most cease to produce offspring or in the case of the buck, breed. The recommendation for a 5 pound pet rabbit is 1/4 cup of commercial pellet feed, 1 cup of vegetables, and some hay. Approximate by doubling for a 12 pound New Zealand rabbit then times that times 20 rabbits which is the largest number we have at any given time. You have 40 cups of vegetables, 10 cups of pellets, and a bunch of hay each and every day for several months. Exact amounts I have no idea but you get the point. With chickens, goats, and sheep to feed along with grandkids half the week, – no way will our wallet cover that.

I don’t have set formulas. If that is your desire then go to Sprague River Homestead on YouTube. She is very knowledgeable and uses commercial feeds to obtain her goals. She mentions that domestic rabbits are bred to eat commercial feeds and she is right but the opposite can be done also. 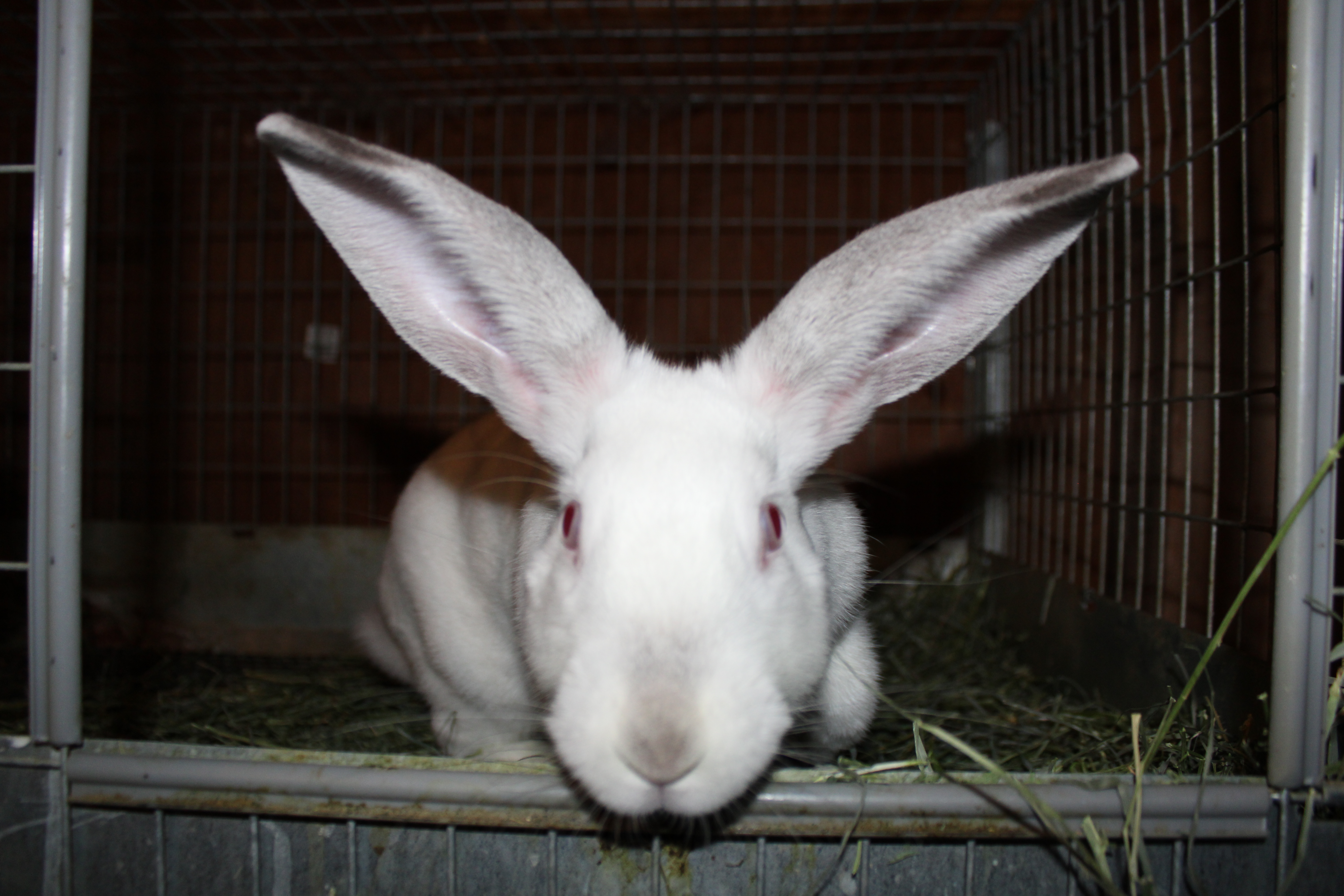 She’ll grow into her ears. She’s not even two months old yet.

The commercial rabbitry on Polyface Farms came to the same conclusion we did and they raise theirs mainly on pasture, more in keeping with nature’s way. It took some time to breed a rabbit that could do what they needed but over the course of a few years, (rabbits multiply quickly) it happened. We have plans for next year to add pasture raising our rabbits for part of the year. We have some fences to move and a rabbit tractor to build. I’m not pounding posts until it rains though. We also intend on using more of our waste from our garden as feed, which will include weeds we find safe for consumption. I keep an eye on our rabbit’s coat, how they act, the gleam in their eye, and how much weight they are carrying and where. It will tell me if they are wormy, have a health issue, or are just plain fat. What goes inside, show on the outside. It’s no different that on the ranch.

As the weather has shifted dramatically back and forth over the last few years, we’ve decided to put in place options for as many scenarios as possible. Something like a closet full of clothes for all weather conditions. We will use what is grown locally as much as possible. Meanwhile, we will choose a hardy group of rabbits not adverse to changes whether that be feed or weather. So no, I probably don’t feed my rabbits like you do. I probably won’t feed my rabbits next year like I do this year either. I don’t feed them the same in the winter as I do in the summer. I figure the more resilient we can become, the more likely we will still be raising rabbits 10 years from now.

Any ole thing won’t do to feed rabbits. It does take knowledge and experience. I don’t mind if your feed program is different than I mine. I’m not surprised. Where you live, your goals, your financial resources aren’t the same as ours. I’ve live outside the conventional box my whole life. My doctor laughs and says I can’t even find it. So if you want to go on an adventure, stay tuned, I’m sure things will change as my knowledge base increases and I wish you well in doing what is best for you.

At this site you will get a nice break down of general nutritional levels of hay for feed for rabbits.