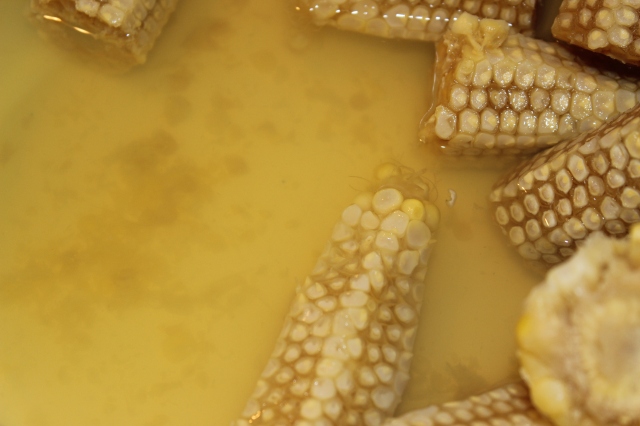 It’s corn on the cob season for us in Wyoming, YUM, YUM!! But personally for my husband and I, we prefer corn off the cob. The dripping of greasy butter down our chins and gnawing the kernels off the cob doesn’t bring us pleasure. So instead, we cut the corn off and use the cobs in a soup instead. A two for one deal!

To make corn broth you cut the corn cobs in half and pack them into a saucepan and barely cover them with water. Set them on the stove to boil. When the water turns a rich corn color. remove and cool. You can use it right away, freeze it, or pressure cook to store it in jars.

Last week, I pressure canned a jar alongside my bone broth I’d been saving in the freezer but needed the freezer room for some broiler chickens I processed.

Now what do you do with corn broth? You make soup of course. You can use it in vegetable soup and you’ll never miss the meat so rich are the vegetable flavors, or you can use it in a cream soup. I went out on a limb this last time and experimented on a soup for our guests from Virginia with a previous guest from Oregon’s smoked salmon gift. I’m not a smoked salmon fan. The commercial variety tastes fishy though I did have some outstanding smoked salmon canned by Native Americans in Oregon. But fishy or not I need to use it and so I’m trying to become inventive.

As a rule, I love smoked fish. My grandpa use to smoke Rainbow Trout and Brown Trout from the nearby waters in Wyoming. He either had a fishing rod, a shotgun, or rifle in his hand most of the year and when he didn’t he was tying flies. An old heavy metal refrigerator was converted into a smoker and many a smoked fish came out. I was happy to be the taste tester for his creations.

But this wasn’t Trout so what was I to do? The gift was wa…y too much for my husband to eat with crackers. I decided to experiment on some guest from Virginia who arrive the next week. Brave, I know. But I figured since they were from the east coast, and fisherman, they might like fish. Not every fisherman does you know so I took a chance especially since I made a really BIG pot. But it was a friend and he’d brought his teenage boys to meet us. You know how teenage boys can eat. Maybe you don’t but if they show up at your door, you’d better have a really big pot of soup with crackers and toasted cheese sandwiches too.

But first you have to make the soup so put butter into a saucepan and sauteed onions and chopped garlic. Use the Maillard action, (I just learned that word) and caramelized them. Meanwhile I chopped carrots and potatoes into about a quarter inch sized pieces. This was to make a soup they could dip their cheese sandwiches in and added them to the onions and butter. I cooked the vegetables just until they began to soften. Then I poured over the corn broth to barely cover them and finished cooking the vegetables. Next in went the cream, black pepper, and smoked salmon on reduced heat. When hot, I added a little powered dried zucchini. I often use it to enhance flavor and thicken a soup. It’s a great way to increase nutrition and use up last summers zucchini. What I was after with the smoked salmon was the smokey flavor but for me mask the fishy taste.

Shortly before done, I added chopped cutting celery from my kitchen garden and checked to see if the salt balance was right. The smoked salmon would add some salt so I waited to the end to add a small amount more. How did it go over? They devoured it!

BUT WAIT! I haven’t told you how to make corn broth. Take fresh corn cobs you’ve taken the corn off of and break in half so you can pack more of them into a smaller space. Then choose a cooking pot in which they’ll pack tightly into and barely cover them with water. On the stove turn the temperature so the water will boil and keep an eye on it. When the water turns a lovely yellow color like in the photo, turn the heat off to cool and remove the cobs.  Use right away, freeze it, or canned it.

I’m hoping to find some good corn this year to buy at reasonable prices so I can freeze a little and make more corn broth as I did not grow corn this year.

With meat prices expect to continue to rise, corn broth is a great addition to your pantry. In vegetable soup and many cream soups, it is a great substitute for chicken broth. And best of all, it comes from something we’d typically just throw in the garbage. I wish I had learned this when our kids were young and I was cutting corn off of 13 dozen ears before freezing each fall. My Aunt has an awesome recipe for creamed corn. I made mine with goat milk and butter. If you want it, let me know.

So don’t throw those corn cobs away. Corn broth is quick, easy, and so worth the effort. Give it a try.