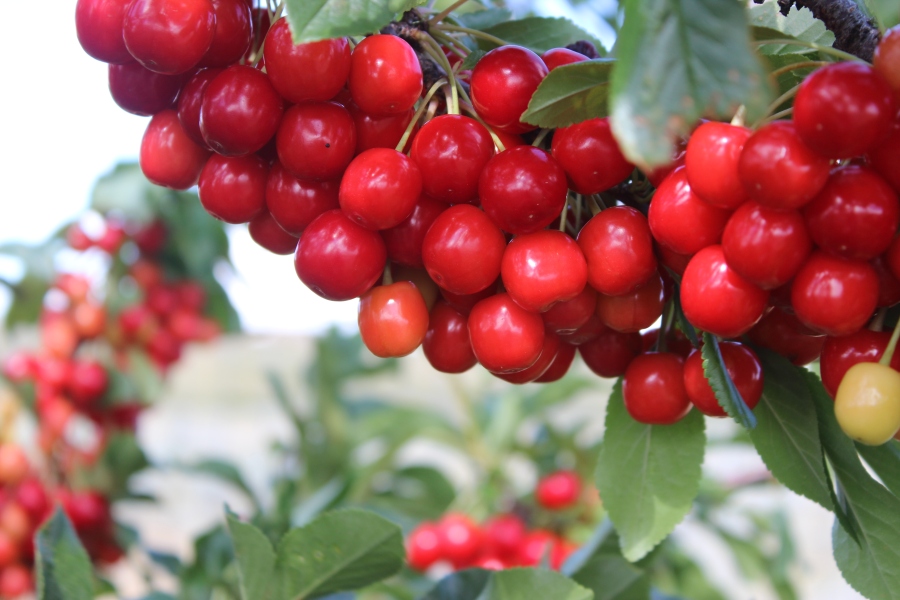 I’m seeking simplicity in all aspects of my life and that includes the garden.

The foundation of simplicity is perennials which retain their positions. A far cry from the marching of plants from one end of the garden to the other in annual crop rotations which never works for me because of my large variety of soils from one spot to the other. They either thrive or hardly survive.

I used the tractor to dump piles of compost over the fence and wheelbarrow old hay and bedding made of wood shavings and poo. Next year we will use the pickup and dump truck to add large amounts of compost to the north garden, and using plastic to try and kill grass with its deep webbed roots along with thistle. The south garden will get another dump of compost also. This will require fuel too but once established outside aid will slow. 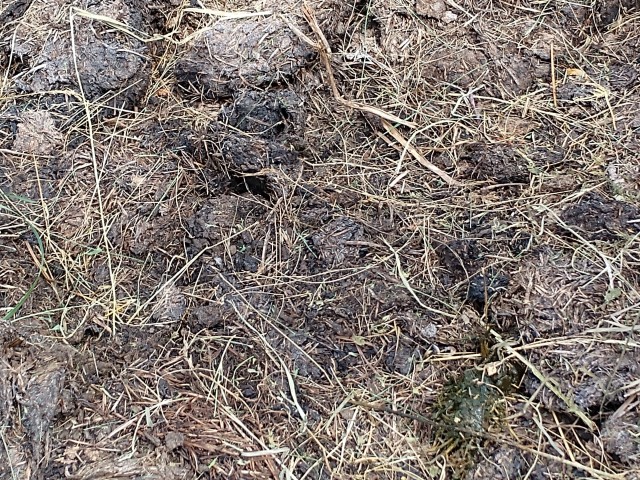 I’ve learned that the Native Americans during the pilgrim times allowed their plants to sit over the winter and decompose. In nature no one uproots plants come fall. Worms, bacteria, fungi, and other organisms all nibble away at roots returning back to the soil nutrients making them available for other plants. The above ground decomposing plants often play host to eggs of beneficial and predatory insects – and yes, some pest insects as well but 95% are typically beneficial. So I will leave my plants to decompose and pile on top old hay and compost from the animals. If the plants are diseased then you can burn the above ground portions that you removed. The roost already have already put the disease in the ground so pulling will make no difference.

The tractor works well to dump large amounts of compost over the fence for the southern garden sweep that runs along the fence. A simple raking spreads the compost over a larger area with a southern slope and wheelbarrow loads with old hay and wood shavings and manure from the animal sheds creates a good mix. I learned that the mounds held more water, intensified the rays of the sun when sloped south for heat loving plants, and they were rich in nutrients. My pumpkins did really well despite the cool summer. Next summer peppers and tomatoes will occupy the space where the pumpkins were to take advantage of the angle. That is after I’ve continued adding to the slope. The mounds shrunk in half over the summer. I left the pumpkins and summer squash to decompose where it lay and am adding compost as I rake corrals and sheds.

The areas I want leveled for instance those to grow grains. The work will be done by chickens when ever possible. 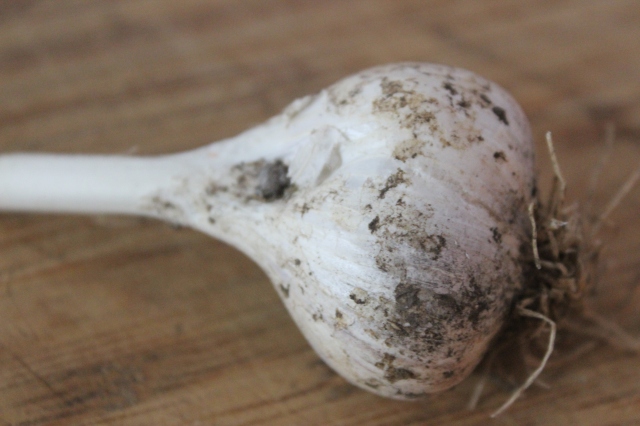 A crop may not do well in one area but if planted in several, there stands a greater percentage of success. It also lowers the impact of disaster in one area. One group of garlic was planted under some sunflowers. They were stunted and research taught me that sunflowers have a chemical in their roots that inhibit growth of plants grown within a foot of their roots. Last years garlic planting struggled as thistle took over but was the bulk of our harvest. Another group of small cloves I planted in July. The soil dried the quickest in that spot but they could not be mulched or I’d bury the tiny cloves and they’d rot. Then they were pawed by a deer’s hoof under the snow this fall so who knows what I’ll find this spring. Another group of small cloves left from winter were planted in late June by the honeyberry bushes and did well but were small so I decided to see what they did come spring. 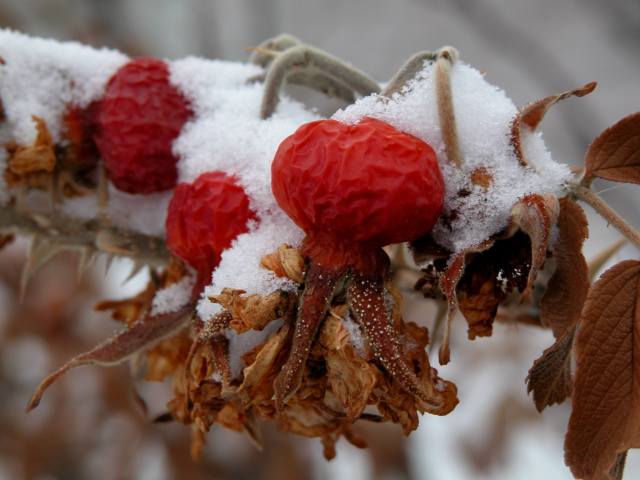 For instance I plan on buying some Rosa caninas for their nutritious rose hips. Around them will be legumes to fix nitrogen in the soil, and tomatoes to protect the roses from black spot. Don’t know if we have that but I’m trying it. Then parsley of which will be a ring of garlic. They are the insect repellents. Parsley flowers attract hoverflies, the larvae of which eat aphids, thrips, and other harmful insects. Also some harmful beetles are repelled by parsley. The most noticeable is that parsley makes the rose blossoms smell sweeter. I might even thrown in borage or comfrey as mulchers to keep weeds at bay because they shade the soil.

Our soil is alkaline but I’m working on an area to lower the pH. The entire area along the south fence of the southern garden is planted with perennials that need a more acid environment. Some areas more intensely than others like the spot I planted two blueberry plants and will add Ligonberry or Partridge berry, which ever you wish to call them. The blueberries will be taller as the Lingonberries are very short. This will enable more to be grown in a smaller space.

This way I can acidify one area to benefit acid lovers while using more alkaline spots for plants not so picky. I can amend my sandy spots for things like calcium which is quickly lost and grow my root crops there. 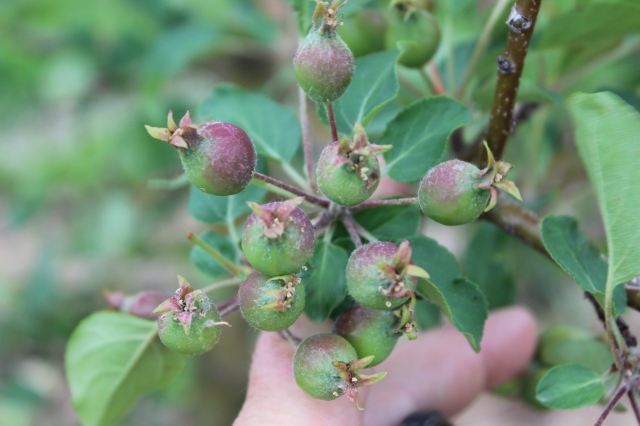 I have four service berries plant in the south garden. They are spread out. One is doing super, another well, and one has modest growth. The fourth is struggling. I put my blueberry plants by it and have amended the soil late this summer to more acidic. The blueberry plants planted late August are next to it and are doing well so I figure the service berry should take off next summer. Near two of these service berry plants I will put a rose. They are in the same family therefor have similar needs and feeding them will feed each alike.

This strengthens their immunity to fight off bacteria faster than monocultures. It reduces the number of pests, weeds, and disease outbreaks because they protect each other. “Studies in China show that planting different varieties of rice in the same field increased the yield by 89% because of a drastic decrease in the number of diseases.”

Next summer this will include our strawberries which were already here when we arrived. They produce for a short time where as Fort Laramie’s, created for this area. are ever-bearing and have a long season. This will mean fewer plants will create more berries and take up less garden space.

In other words the blossoms, leaves, stems, roots, and fruit. I’m also looking for being able to glean various parts of the plant over a long period of time. That way we aren’t waiting for a single harvest of one part of the plant. Especially necessary if we need to solely feed ourselves.

Simplicity does not mean easier in the beginning. It will take a great deal of planning and some experimentation too. But in the future this added effort will mean: less watering, less tillage, increased soil mass, fewer diseases, fewer pest problems, increased yields, less fertilizer, and more crops can be sustained in a smaller area. That would be paradise!

One thought on “Simplicity in the Garden”