If you want super moist roasted chicken, this will deliver. I started with a recipe on the internet, threw out part of it, the sage part. I did not want it tasting like Thanksgiving. I added parts, and guessed amounts since I was using chicken and not turkey and not the size the original recipe calls for. You know, dump cooked. Oh yeah, and I used home made garlic powdered. A more intense flavor since there are no fillers and anti-caking agents. I also added more grated lemon rind – two whole lemons worth. I love lemon chicken.

I started with a thawed 6 pound chicken, skin on. That’s important.  I put 3/4ths a cup of butter from the refrigerator into the microwave and over softened it. Then I mixed in salt, pepper, lemon zest, and powdered garlic. The over softened butter had to be put  back into the refrigerator to make it just right for stuffing under the skin. Of course you could just let the butter soften on the counter but what’s the fun in that?

I forgot to add the fresh thyme. It was growing right there in the window but I spaced it. I know it would have been good because I usually do use it but I now know it is good without too.

Butter that is just right is important because Kirk had to smoosh the seasoned butter under the skin that he put little slits in for that purpose.

Mix and then put slits in the chicken skin in which you put the mixture in.

Kirk’s job was to put the chicken in the Char Broil and watch it. Mine was to do the side sides. The salad came first and mine is a bit half and half. Half lettuce and half vegetables. Which when possible includes some corn on the cob. Love fresh corn in my green salad. Simply shuck the corn, leave it raw and cut it off the cob. Toss in the salad and then take the silks; chop off the brown end; chop the pale, yellow silk up into fairly fine pieces and add that too. Don’t miss out on the vitamin C silks offer and the added corn flavor. They are pretty good. The corn husks can be dried for later use or put in the refrigerator to wrap rice, a vegetable, or meat in for another meal. Think of it as financial savings and a nutritional boost.

As the chicken turned a golden brown, I had some red baby potatoes boiling. They were for drizzling lemon, milk gravy over. Never would have thought lemon gravy would be so…. good.

We had some homemade bread so I didn’t make biscuits but instead got out the slicer to cut up the zucchini for frying. A little olive oil, a little salt and pepper, and of course powdered garlic. This woman loves garlic. Don’t worry, the chicken is not overly garlicy. It has a more lemony flavor but not heavy. The moisture though is intense. 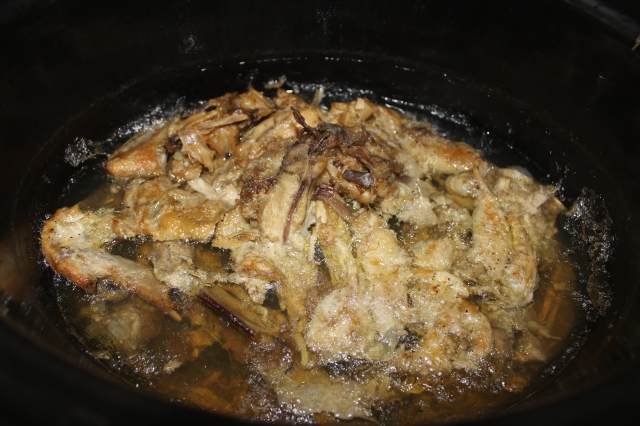 After dinner, out came the crock pots. The chicken bones with scraps of meat still clinging went in with a shower of water. It will make lovely bone broth for a soup. 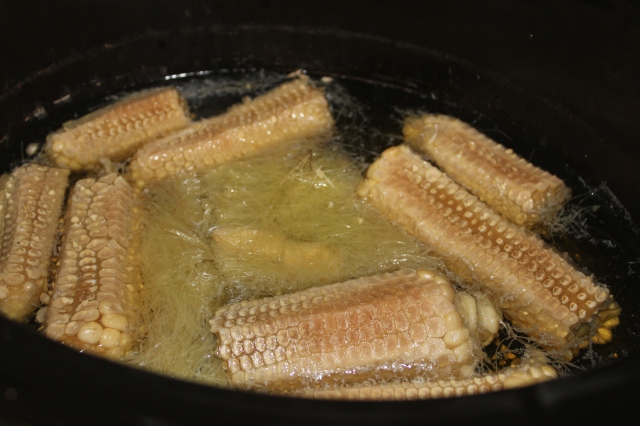 The corn cobs went in another crock pot along with extra silks for a clam chowder I have in mind. The broth has a fresh corn flavor. I cooked both crocks with the lid on and later the lid off to evaporate some of the fluids and intensify the flavors. Now that is making the most of your food. Unless you have extra gravy left over and you wanted to make a pot pie. Yum, yum! My goal this year is to learn to use my food to its fullest. How much food we waste is shocking. I’ve vowed to change so stay tuned, I’ll take you along with me as I learn to “waste not want not” and stretch our dollars in the yummiest of ways.