We have baby chicks once more. Should be interesting for as I look at the long range forecast for the rest of the month, the temperatures are suppose to cool down to normal, burr…

One of our Australorps, to whom raised five baby chicks this summer already, decided she rather liked motherhood and after a break began setting once more in secret.

Naughty me did not mark on the calendar when the hen began setting. To be truthful I was not counting the hens in the coup each night and did not miss her for who knows how long. Not until I noticed a drop in egg production in the nests. The hens were popping in and out of the small little coop to lay them. The one I keep moms and chicks in. I guess it was more private. The black hen saw this as an opportunity and sat.

I could shove her off or I could see what happens. You know it, curiosity go the best of me. So I thought this would be a good experiment to see how well baby chicks did in the colder weather with mom. I put in some water and food and closed up the coop waiting to see what happened.

Not knowing the day of hatching I was not ready when they arrived. No big deal except mom took her little ones out into the run and seemed to stay there. The eggs in the nest were cooling down fast. The mother hen in ME was getting worried for if they cooled too much, they would die.

I reasoned that this was her second time and maybe the other five eggs weren’t viable and she knew it. An older hen often shoves rotten eggs out of her nest and can tell by the weight difference and the slosh of liquid inside. Maybe these were rotten after all the new rooster was unproven for virility. So I gathered up the eggs and went to the pasture to toss them. The first one landed and burst open, a chick inside. My heart wrenched when I saw it gasp for air. It had a large egg yolk attached, its life source of food. It did not last long as its lungs were not developed.

Guilt set in. I gently shook the next one. It sloshed, a dud for sure so heave ho with it. The next felt heavier, and the next, and the next, but the final one was again sloshy. So two went in the field and three in the house.

Oh what to do with them now?

It was rather late to set up the incubator, it would take hours to heat and regulate the temperature on the big thing. It doesn’t work well anyway with just three eggs. My beloved heating pad that stays on and doesn’t turn off after a period of time bit the dust. Sad, sad day as I used it to warm animals including baby chicks, make yogurt, and Kirk used it to heat a solution for his knives. Loved that thing!

How about my two quart yogurt maker? It has glass jars that go inside so why not chicks? I could line it with towels, wet the top one until just damp to keep the humidity high for hatching and cover the top part way with another towel to cool the temperature a bit. It incubates at 110 or 115, too high for chicks. They need 99 F.

I’d either cook them or it would work. Desperation can be the mother of invention and it was. At about 4:00 am the next morning two chicks hatched. When they dried, I took them to their mom. She was thrilled. But the last poky little chick didn’t even peep, a sign it is soon to hatch. Maybe it just needed more time. 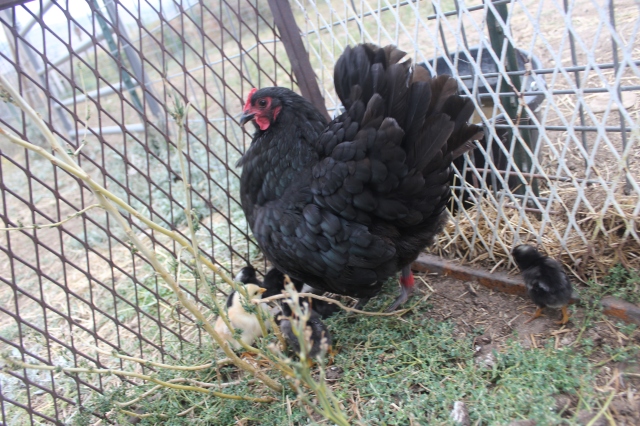 Would have loved better photos but try as I might they would not cooperate. Worried for their safety since they were so stirred up I had to cease.

The next day I grew worried as I was turning the egg for the fourth time that day. Our power is unreliable and who knows when it will go out again. The reason I no longer hatch eggs in the incubator. So I just prayed, “Lord keep the power on!”, and kept turning the egg.  Then I began to worry that this was one of those eggs that the chick has died inside for unknown reasons?It was two days later.

I did not want my yogurt and buttermilk maker tied up forever. So I broke a hole in the egg on the big end where the air sack is. Yup, the chick was breathing fine and about a quarter of an inch from the shell, a sign it was not fully developed yet. Otherwise it fills the whole egg.

So now I was really in a pickle. The air exposure dries out the protective membrane the chick is enclosed in and when that happens it can’t break through the shell. You can’t break it out of the egg or the chick dies. The struggle to get out develops its muscles to stand and walk and for reasons unknown to me they just die within a short period of time if you help them too much.

The reason for the high humidity during the hatching time is to keep a soft membrane to break through so now what? At first several times a day I just put a small drop of water off the end of my fingertip on the area and then tilted the egg downward so the excess moisture would drip off and not drown the chick.

But I was scheduled to go see my father at the nursing home with our daughter and would be gone for hours. Hm…… what if I put clear plastic tape over the end, like the the kind you use to wrap packages? That would keep it moist.

Did that and then I had to peel it back once in a while to check to see if the baby was still breathing. Don’t laugh. You mothers know how many times you check on your newborn lying sleeping in their crib just to make sure their chest is rising and falling in rhythm. I also worried if the oxygen level was high enough inside the shell. I just plain worried. My peeling and unpeeling was breaking down the egg’s shell fast. Would the chick develop before its house crumbled?

A huge relief when I went to turn the egg once more and there was a small outward crack , a sure sign it was hatching. Funny enough but the chick got to know my voice and peeped when ever it heard it. I was getting really attached now. I left strict instructions for my husband to keep an eye on my baby. I had stressed enough over the little thing and did not want the last few hours to be its last.

Indeed upon my return it was drying nicely and standing on the rags in the incubator hollering at the top of its lungs when it heard me enter the room. I could not have been a prouder mama and cuddled it close. When it was steady, I sent it off to see the Australorp hen who had so faithfully set on it. She was thrilled to include one more in her brood and then there were six. Five black fluffy babies and one yellow.

Now to see how they fair the cold. This mama does worry. My husband says I have an over developed mothering instinct.

2 thoughts on “Hatching Chicks in a Yogurt Maker”