Tassels on the top of corn are not just adornments but the male part of the plant which contains pollen. Shake it, and if the timing is right, a yellow cloud (the pollen) will float down. That is the wind’s job, a romance express to carry the pollen to the silks which are the female part of the plant. This is best done in a humid environment. So during a drought they are just too hot to trot and nothing much happens. Which leaves your corn cob with bare spots where kernels did not form.

In Wyoming this year we had another problem. The wind blew so hard and frequent that the corn got the message, ‘Fall down and stay down.’ The dog pile impeded the breeding process and made watering a nightmare. I couldn’t pull a hose through the rows like I usually do and I couldn’t sprinkle with the tripod sprinkler since the corn that refused to obey the wind stood like sentinels and blocked the water sprinkler’s spray. 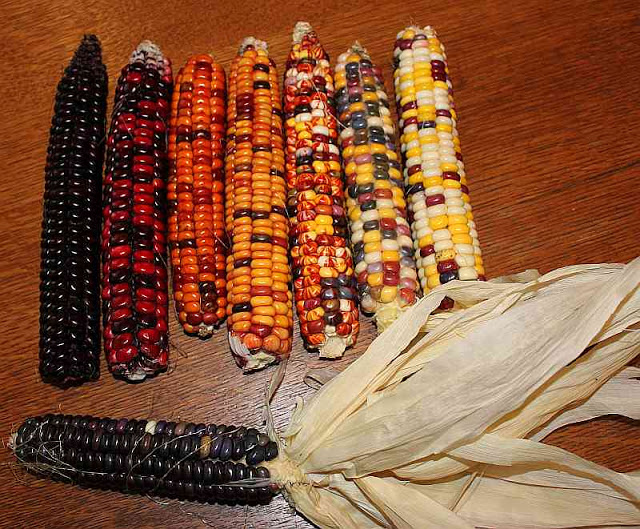 Luckily we only had Painted Mountain corn growing. A hardy variety known to handle our cold wild west weather which is rich in micro-nutrients. We westerners need corn bread with our ham and bean soup on cold winter nights. What a difference from the store’s degerminated corn meal. Fresh, rich, corn flavor exudes from every bite. Though you do have to get over the slight gray color of the bread because of the jeweled appearance of the kernels. But one bite and you soon forget the unusual look.

When growing corn one needs to realize what a social butterfly the plant is –  party, party, party. Corn does best planted in a fairly square pattern with lot of rows of plants,

the more the merrier since the boys, the tassels, are housed in the dormitories top floor and

the girls, the silks, are on the bottom floor. The romance elevator, the wind, has to cart the pollen down to each and every silkened princess at the ball. 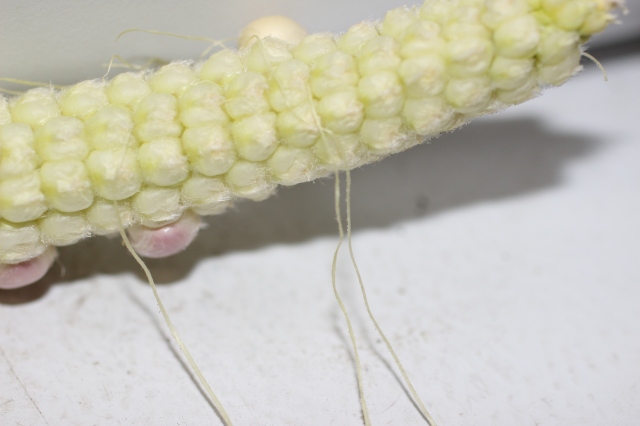 After all each silk is attached to a potential kernel. If every single lady is not dance with at the party

then there will be missing kernels on your cob. This party goes on for approximately ten days after silk emergence. The first three or four being the party hardy times.

If the silks are particularly long on your cob then you know without pulling the husk back that the guys were off hunting or sports car racing instead of attending the party. You know how some guys hate to dance. Or it could be that the wind’s elevator was under going maintenance repairs. Neither a good thing so it is always wise to plant a number of rows of corn in a fairly square plot to insure that enough guys come to to the ball even if they just fell down the stairs.

Keep in mind that the wind blows sideways and it is known to cart the guys afar to the next field to look over the crop of ladies there so be sure and keep the popcorn, the dent corn varieties, and the sweet corn varieties separated far enough apart that you don’t have cross-pollination. 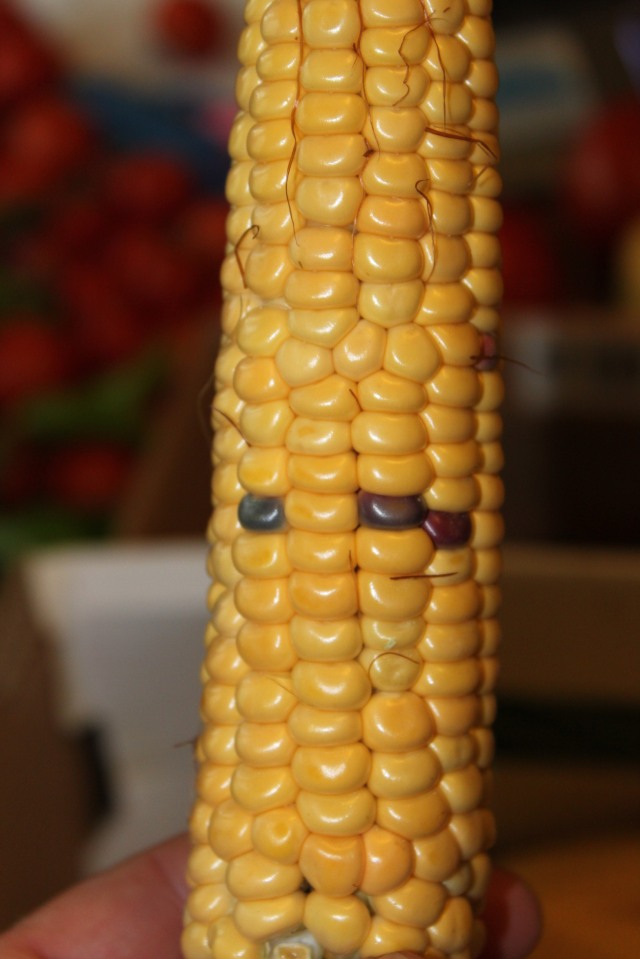 You can tell easily if two corns of differing colors cross but not if they are all white corn or yellow corn.

Our twelve year old grand daughter expressed that it was like opening up present after present when we grow Painted Mountain corn. You just do not know what’s inside. Including an unusually large number of multiple ears in each husk this year. One or two extras is not unusual but we had a record five in one husk. It makes the just one cob boring if it wasn’t for the beaded variety of colors. Painted Mountain corn is indeed gorgeous to the eyes.

We are not waiting this year for the corn to dry on the cob which it never fully does anyway before a hard frost. In fact the mountains already had their first snow. I hear it was snowing as early as August 5th at Beartooth Pass and has snowed off and on ever since. The Big Horn mountain range next to us, (we live nestled in the foothills) was sprinkled with snow above 9000 feet a few days ago. That’s Wyoming, “If you don’t like the weather just wait a few minutes, it will change.”  I’m trying to get our garden harvested as much as possible while hoping for a nice fall so we can harvest dried beans. We need to move on with cleaning and organizing the place and remodeling. Only time will tell what happens next.

7 thoughts on “Corn Tassels and Silks”