Part of becoming more self-reliant is to get more from what we have.  Therefore I am taking a closer look at our resources and contemplating storage, extending the harvest, other uses for parts of the plant or animal, and preserving methods, along with time and space savers. Plus possible money making opportunities if the need should arise or we have a surplus. You have only so many hours in a day, so much land, so many animals, and so much money which makes it critical to get more from less to survive with in hard times.

What if I told you that I know 2 methods on how to get more cabbages from one plant? Those of you with a small garden could grow fewer plants and gain more space to grow something else or eat more cabbage. Those of us with livestock and large gardens could get the same thing just in a larger proportion and livestock feed.

It was quite by accident that I discovered a way to obtain a huge cabbage center with three more good sized cabbages growing at the same time on the same plant.

I was working on the thought pattern of using more of my garden to feed the livestock, right now mainly the rabbits. What I was wondering was if my removal of a few leaves would adversely affect the plant? The question was answered in full since my main heads this year are huge.

What I did not expect was that a cabbage started growing where ever a leaf was removed. When the main head was removed another cabbage grew there also. That makes four cabbages more than the main head creating a total of 5. That is impressive. Would this go on for a long time if our weather allowed it? I’ll never know since Jack Frost is creeping closer on his journey back to our house.

If he’ll hold off, I expect three good sized cabbages more on each experimental plant since they have been growing since mid July. With the main root system well developed, the pace in which they grow should be rapid.  The new cabbage head in the center where the old head was will be rather small but sufficient for a stir fry or to feed more rabbits.

More cabbage to feed us, the rabbits, beef, chickens, or goats is definitely a way to become more self-sufficient and what I call maximizing your harvest.

My oldest daughter chimed in when I spoke of my discovery with some advice and another way to use the outer leaves often simply tossed into a mulch pile.  She serves as support staff for the local chefs who give cooking classes in the evenings. It is a great way to learn and get paid to do so. She told me that a few of these fibrous, tougher outer leaves are often plucked to make cabbage roll ups or stir fries. I can see where their stronger texture would come in handy in a roll up and am told the slight bitterness of these outer leaves disappears in cooking and the heat tenderizes them. In my ignorance I did not know they were bitter since I’d never used them. Simple me just fed the plant to the goats and beef in the fall after we harvested the heads.

Our daughter cautioned me not to harvest very many leaves from each plant as one chef said it would indeed harm the plant as it needs lots of photosynthesis that the leaves provide which is why I was prudent in the first place.”Don’t put all your eggs in one basket.”

Two questions remain. 1. How early can I start harvesting outer leaves and not harm the plant? I’m guessing it will depend on how large the root system is to feed the plant. 2. And how many leaves can be harvested before the plant is adversely affected? The questions probably won’t get fully answered as there are so many more plants to experiment with in the garden and so little growing season. Besides, too many leaves would shrink the size of the new cabbages that develop. The roots can feed only so many. 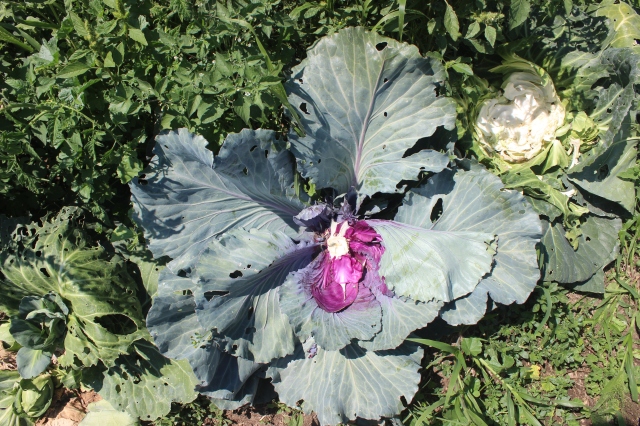 What I’ve done for years to get more cabbage from one plant is to harvest the head and then slit an X into the core’s center about a quarter inch deep with a knife.

This is the results of the X cut. Four more cabbage heads growing.  One slit would of course give you two and they would be larger. I’m thinking that might be smarter or now I know you could simply wait and 1 head would form.

The heads are smaller with method II only because a killing frost comes before they have had much time to develop but most reach a nice small coleslaw salad size before Jack Frost appears and of course there are always the hungry livestock.

No matter what you do, cabbage plants just want to keep giving. I’m really impressed. Keep in mind that I also have an experiment going with 4 different kinds of cabbages and this multi cabbage on one plant works better with some types than others but more on that in another post when I talk about the varieties I’ve grown and why?

I’ve been rather ignorant about these ancestral staples and in my ignorance shied away from them. I’ll use the excuse that my mother never used cabbage beyond coleslaw and neither did any of my relatives. With my new found wisdom, I’m now thinking they shorted my education. They will become a greater part of our diet as they are healthy and grow well in our harsh climate where little else does. So please help me expand my taste bud experience with your favorite recipes. I’m growing rather fond of cabbage.

I’ve focused on cabbage this year as it is an accumulation of past experiments reaching an apex and conclusions. We’ve a LOT of cabbages so what better year than this to try preserving some too. I’ve never done it before but I can see I should have.

Before your interest slumbers off in the sea of words, I’d better bid you adieu but stay tuned as I will return. We aren’t done with cabbages.

8 thoughts on “3 to 5 Cabbages Grown From One Plant”