We’re having an early spring. A huge blessing as we have a long work list. Larger than our time and energy as it encompasses last years list too. The discovery of our daughter’s cancers in January of 2017 threw us for a downward spiral. This year they found several more areas of the nasty beast. A break is not in the cards and chemotherapy will be a part of her life forever along with the nasty side effects. We’ve realized that we can’t just wait for the storm to pass. It’s here to stay. So a hard look at what we need to do to survive is taking place. We realized that the general answer was the same as before – become as self-reliant as possible. Our boat has been rocking precariously in the storm and we need to find anchor before we wreck.

It is a much larger garden and more animals that is needed now just as we grow older and less energetic.  ‘Work smarter, not just harder’ I’m always telling the four grand kids who stay with us. The Lord has whispered that we need to move toward a permaculture approach if we are to succeed. One thing benefiting another in a simplistic manner.

One area which has fallen into a rhythm but needs tweaking is manure. We are handling a lot of it right now and don’t our backs know it. Something everyone does this time of year in snow country and especially those who garden.

As I move poop here to there, I’m reminded just how bad I am at making compost lasagna for I pass my failure over and over. I just don’t have the right ingredients, in the right amounts, at the right time for it to work. See this pile?  It’s three years old. Clever me thought the pallet fence would be great. It just frames my failure.

The beef’s pile on the other hand that was just their manure and old rotting hay from around the hay feeders has broken down nicely. Not quite complete in two years time but usable. So I thought why not have them do my garden composting for me? They till daily as they crawl up to sleep on top basking in the heat of decay. The old is now around the fruit trees and on the south garden where it will break down even faster. The thinner the layer, the faster it decomposes as it is exposed to worms and the elements. Nature does the second stage of composting. So why pile it? Why learn to do compost lasagna? We’ve done some cleaning around their hay feeder piling it for their delight. This summer I will give all the garden weeds to the rabbits and beef? Those that are safe anyway. It turns into meat and lovely poop for my garden vegetables. Nature at its finest and a financial success story.

Our household food scraps we no longer put in a dish for the chickens. They just picked through it and left the disintersted to rot which left me with a stinking dish to clean. Instead we gather scraps from the kitchen in a bucket. The contents are dumped on the ground outside the fence next to the cherry trees. When the chickens have had their fill, the wild birds snack, and then come evening the deer roam by to see what’s left. Nothing remains. Not even the Cutie orange peels. No mulch pile to turn and tend. I LOVE IT!!

I’ve worked out a rotation for the small animal waste of rabbit droppings; and goat or chicken poop laced with sawdust. It never reaches a mulch pile to be tended and then handled again to be wheel-borrowed off to the gardens. These manures can be applied immediately so why not? The north garden gets the fresh stuff in the fall until the snow drifts pile up against the garden gates blocking entrance. Then I spread the manure onto the pine trees next to the barn but only in winter when the snow is deep. Otherwise it goes onto the south garden on through spring time when the soil is turned over. Summer’s bounty of small animal manure is tossed onto the raspberries. No large poop piles to attract flies which torment the livestock and in turn me. No smell to stink up the place. No handle twice project and the natural elements do the job quickly turning it into precious compost. Definitely a ‘Work smarter, not harder approach’. 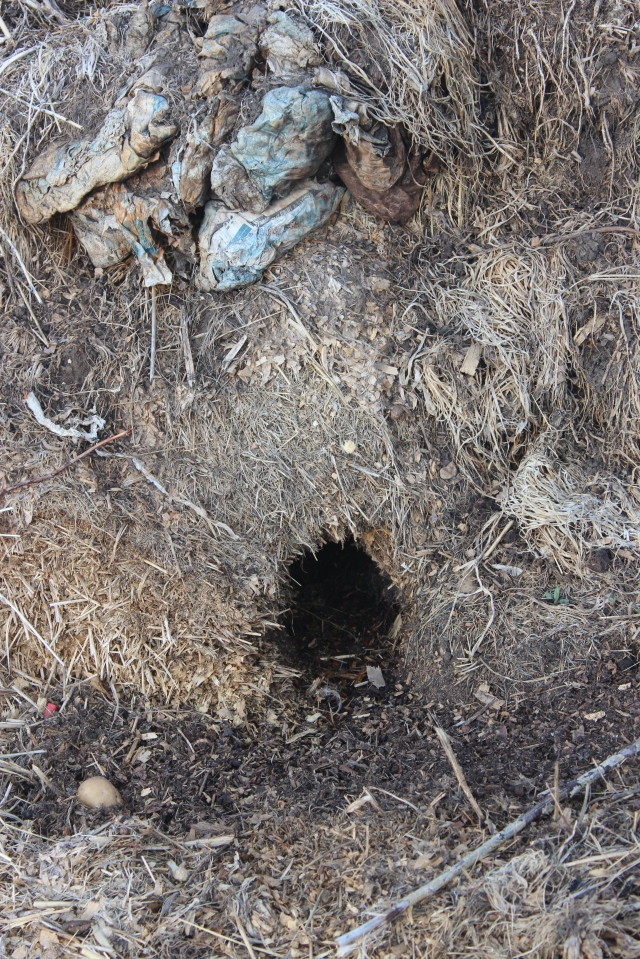 Now to get the failed lasagna compost pile moved. I’ve got plans for it too. So has a wild rabbit by the looks of things. I’d guess she has a fluffle of little ones inside. Lots of insulation and maybe a little decomposition heating.

I’ve hauled off what I can in a wheelbarrow with the time I have but two winters and summer’s build up of hay fallen on the ground has given us a deep soggy mess. A bacteria risk for udders, risking mastitis. 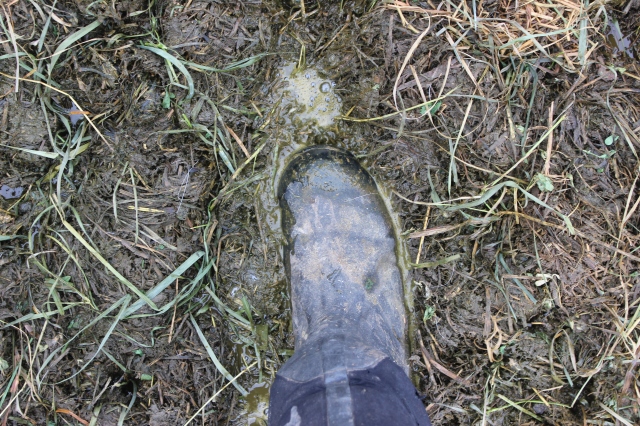 And the risk of giving animals foot rot as their hooves sit in this mucky bacteria infested rot as they munch on precious hay. When the hay falls out of the feeder, you don’t dare pick it up and put it back in. I’ve mucked out some of this by hand- just enough to keep our goats’ feet safe. But definitely a work harder approach. This stuff is for the beef to till.

The solution is to move the corral fence back to create a larger corral, enough to get the tractor in. Just after winter only though since the rest of the year, I rake a bit here and there to haul off and pile around the strawberries. This is Permaculture. Simply put, it is working with nature, imitating her, and working smarter so you don’t have to work harder.

Do you have a low maintenance approach to kitchen food waste and manure? I think we can all learn from each other.