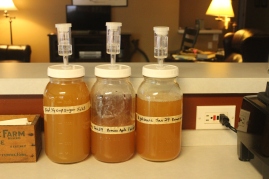 I have found so many ways in which to use vinegar for cooking, preserving, cleaning, and medicinally. But I’m terribly disappointed in the vinegar from the store. I knew there had to be something better out there and there is. We love Olivelle but the price is well,… pricey. We use it to drink by putting a little in water to flavor it. Our favorites are tangy tangerine and lemon. In pioneer days they use to mix vinegar and water to take out to haying crews in the fields. It is refreshing!

I’ve wondered why the store vinegars are so poor quality and found out they make them often in a matter of hours not months with artificial acetic acid. The only way we could possibly have a large volume of vinegar of decent quality we found is to make it ourselves since we are not “Daddy Warbucks”. No big surprise there so that is my goal this year. To gain a basic understanding and produce descent quality vinegars of my own.

I’ve studied many homestead blogging sites and they are all using the wild fermentation method. Nothing wrong with wild fermentation at all stages except the risk of failure is greater. The product of this method has a greater variability in strength, and flavor.  Each homestead blogging site left me with more questions that answers and an uneasy feeling so I began ordering books and researching wine making sites. There I’ve found my answers and more questions but that uneasy feeling is going away. My greatest successes in self-sufficiency have always had science in the background so that is where I’m beginning, research and experimentation.

One book I ordered is HIGHLY scientific, a bit over my head but I’m figuring it out slowly. It has the professional in mind as well as a serious hobbyist and speaks of vinegar made from many fruits and berries.

Since apple cider vinegar is a easy starting place, that is where I’m beginning. I’m pressed for time as I need to have a basic understanding by the time fruit and berries are on in the garden and I’m working with  slow processing. If that isn’t a oxymoron difficulty. LOL

What I’ve learned so far: 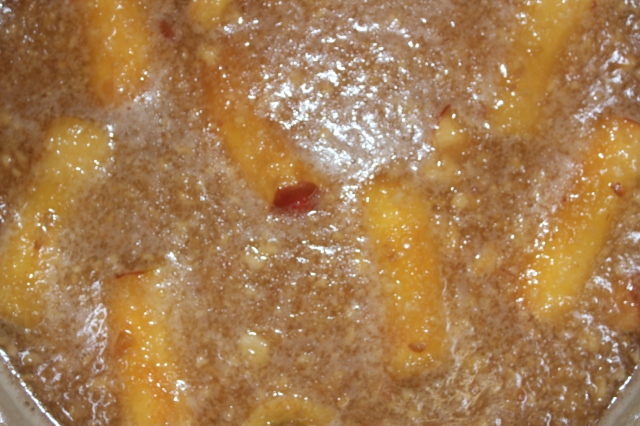 1. Don’t use chopped apples. Grind your apples into applesauce. Experimentation has shown me that fermentation begins sooner and is more vigorous. My professional vinegar making book turned me on to this trick.

I have been leaving the applesauce to ferment in a crock for a week and then straining most of the sauce out. From there it goes into the jars with the air locks. Two weeks  in the crock the first time did not produce as nice a flavor. I think because wild beasties entered the scene.

2. Apple seeds when broken release amygdalin into the body and produce cyanide. Small amounts can be detoxified by enzymes in your body, but large amounts can be dangerous.  Vinegar making does not involve just one apple but large amounts so caution is necessary with apple seeds. Do put the cores in the fermentation though as it won’t be in for long and adds more apple to ferment. The seeds need to remain unbroken.

3. Air Locks help keep the apples from contamination during the mash to alcohol stage.  The apple chunk method did not give me as strong an alcohol smell. Vinegar- alcohol odors were mixed at all stages  and a strong alcohol level was never reached. . With the air lock there is no doubt that the mixture has reached a full alcohol stage. One whiff and the alcohol smell bolls over this non drinker. The stronger your alcohol, the stronger your vinegar. Most homemade vinegar are not strong enough to use in pickling. So I need to learn to make a stronger alcohol. I want to eventually learn to make home made that I can use to in pickle making. That would be self-sufficient.

4. After the mixture has reached full alcohol and is no longer bubbling then it is ready for wild fermentation. Note the jar on the left versus the one on the right. The first thing you notice is that the liquid on the left is much lighter and clearer. This is what happens when it is alcohol. You can still see it bubbling so it is not quite reached full alcohol level.  When it stops, then wild fermentation begins in a crock. This wild stage is more controlled because of beginning with a stronger alcohol.

The mixture on the right is younger and still apple juice.  With applesauce it is hard to filter off all of the apple parts but since this will be strained several times in the whole process to becoming vinegar, the apple pieces won’t remain. The mixture on the left is my first air lock experiment and first applesauce batch. I’m learning with the following ones how to better filter out the apples in the sauce to have a cleaner juice.

My mind wondered to using my juicer that heats on the stove. The pro book says it leaves you with a less fruity flavored juice. That has me looking into a  fruit presses because I do like my vinegar water. My family and sister’s are surprised when I introduced them as all they had experienced before was the grocery store variety.

As you can see this is not a step by step process blog. That will come in time as I’ve worked out the best way to proceed. Then I’ll move on to fruit juices and share that. So far I can tell you the smell of the vinegar brewing in the crock is going from alcohol to vinegar and the smell is divine – really appley. It entices you to drink it. But not yet, it still has an alcohol undertone so this good little Mormon girl will wait.

Have you thought that maybe learning to make alcohol would be a good thing even if you don’t drink? It has crossed my mind as it would be good to have on hand some strong stuff for disinfectant for wounds and equipment. And if I can get a good enough quality, I can quit going to the liqour store every few years to buy Vodka to make real vinegar extract. Leaves questions in peoples eyes when they know you are a member of The Church of Jesus Christ of Latter-Day Saints.  But making homemade Vodka is a whole nother project.

Have you made vinegar? What did you think?